The most borrowed books of 2022 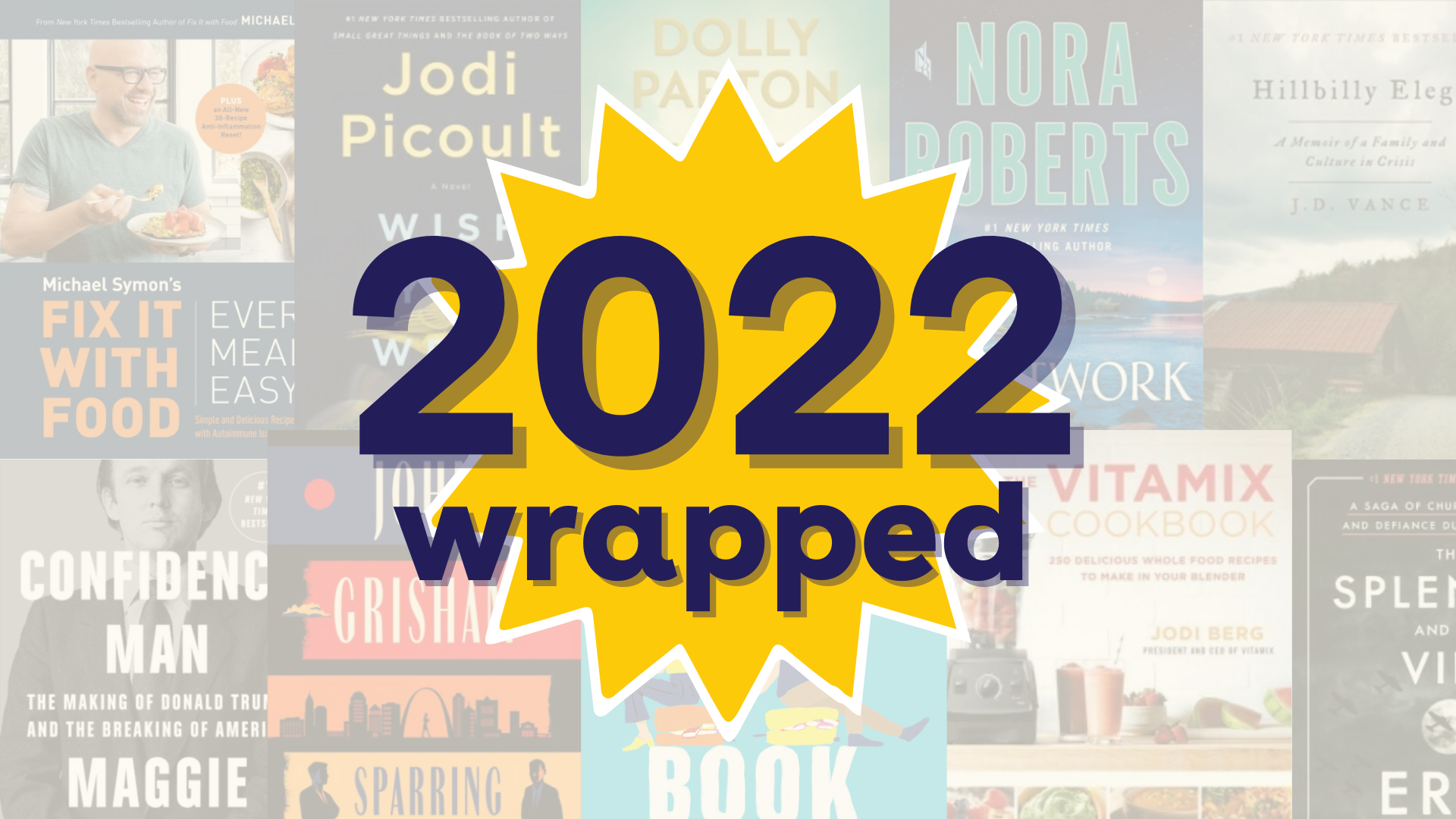 A young singer-songwriter on the rise - and on the run. A romantic getaway gone horribly wrong. An inspiring portrait of courage and leadership in a time of unprecedented crisis. These were just some of the most requested stories CCPL cardholders read, listened to and watched in 2022.

(Note: The links below will show you each title in all available formats.)

Dolly Parton is absolutely on fire right now. She was inducted into the Rock & Roll Hall of Fame, her Imagination Library is putting books in the hands of children all over the world, and she published our most popular fiction book of the year with perennial list topper, James Patterson.

1. Run, Rose, Run by Dolly Parton and James Patterson
2. The 6:20 Man by David Baldacci
3. One Step Too Far by Lisa Gardner
4. Invisible by James Patterson and David Ellis
5. Sparring Partners by John Grisham
6. What Happened to the Bennetts? by Lisa Scottoline
7. High Stakes by Danielle Steel
8. Wish You Were Here by Jodi Picoult
9. The Judge’s List by John Grisham
10. Nightwork by Nora Roberts

1. Confidence Man: The Making of Donald Trump and the Breaking of America by Maggie Haberman
2. The 1619 Project: A New Origin Story by Nikole Hannah-Jones
3. Atomic Habits by James Clear
4. Eat Better, Feel Better by Giada de Laurentiis
5. Keep Sharp: Build a Better Brain at Any Age by Dr. Sanjay Gupta
6. The Body Keeps the Score: Brain, Mind and Body in the Healing of Trauma by Bessel A. van der Kolk
7. Cleveland: Then and Now by Laura DeMarco
8. Hillbilly Elegy: A Memoir of a Family and Culture in Crisis by J.D. Vance
9. The Splendid and the Vile: A Saga of Churchill, Family and Defiance During The Blitz by Erik Larson
10. 12 Rules for Life: An Antidote to Chaos by Jordan B. Peterson

Our 10 most borrowed fiction eBooks of the year includes Book Lovers by Emily Henry, which just so happened to be the record-breaking 3 millionth eBook we loaned this year.

1. The Last Thing He Told Me by Laura Dave
2. The Paris Apartment by Lucy Foley
3. Wish You Were Here by Jodi Picoult
4. Apples Never Fall by Liane Moriarty
5. Verity by Colleen Hoover
6. The Maid by Nita Prose
7. The It Girl by Ruth Ware
8. The Judge’s List by John Grisham
9. Book Lovers by Emily Henry
10. Run, Rose, Run by Dolly Parton and James Patterson

1. I'm Glad Mom Died by Jennette McCurdy
2. Maybe You Should Talk to Someone by Lori Gottlieb
3. The Sum of Us: How Racism Hurts Everyone by Heather McGhee
4. Atlas of the Heart by Brené Brown
5. Atomic Habitsby James Clear
6. Hello Molly!: A Memoir by Molly Shannon
7. Crying in H Mart: A Memoir by Michelle Zauner
8. Educated: A Memoir by Tara Westover
9. The Devil in the White City by Erik Larson
10. Vanderbilt: The Rise and Fall of an American Dynasty by Anderson Cooper

Delia Owens' captivating coming-of-age murder-mystery Where the Crawdads Sing is a book with some serious staying power. It has been at or near the top of our year-end most-borrowed lists since it first came out in 2018 and it's still going strong as our most borrowed fiction audiobook of the year.

1. Where the Crawdads Sing by Delia Owens
2. The Last Thing He Told Me by Laura Dave
3. The Paris Apartment by Lucy Foley
4. Apples Never Fall by Liane Moriarty
5. Wish You Were Here by Jodi Picoult
6. The Maid by Nita Prose
7. The Silent Patient by Alex Michaelides
8. Ugly Love by Colleen Hoover
9. The Guest List by Lucy Foley
10. Run, Rose, Run by Dolly Parton and James Patterson

1. The Subtle Art of Not Giving a F*ck by Mark Manson
2. Atomic Habits by James Clear
3. I'm Glad Mom Died by Jennette McCurdy
4. Atlas of the Heart by Brené Brown
5. 101 Essays That Will Change the Way You Think by Brianna Wiest
6. Educated: A Memoir by Tara Westover
7. The Storyteller: Tales of Life and Music by Dave Grohl
8. Will by Will Smith
9. Sapiens: A Brief History of Humankind by Yuval Noah Harari
10. Finding Me: A Memoir by Viola Davis

Health conscious eating was clearly on our minds in 2022. Even Cleveland's own burgers, brews and barbecue guru Michael Symon got in on the act, topping our list of most borrowed cookbooks with delicious recipes for people suffering from autoimmune issues or inflammation.

1. Fix It with Food by Michael Symon
2. Skinnytaste One and Done by Gina Homolka
3. The Plant Paradox Cookbook by Dr. Steven Gundry
4. The Complete Mediterranean Cookbook by the Editors at America's Test Kitchen
5. Eat to Live Quick and Easy Cookbook by Dr. Joel Fuhrman
6. The Pioneer Woman Cooks by Ree Drummond
7. The Eat Fat, Get Thin Cookbook by Mark Hyman
8. Eat Better, Feel Better by Giada de Laurentis
9. The Vitamix Cookbook by Jodi Berg
10. The Blue Zones Kitchen: 100 Recipes to Live to 100 by Dan Buettner

Yes, we know. The title of this post is "The Most Borrowed Books of 2022," but DVDs are still popular with our cardholders so we figured we'd share. Here are the movies folks were watching in 2022.